The Tenjinbashisuji Shopping Street in Osaka is purportedly the longest arcade in Japan, a 2.6km-long shopping narrow mall starting at Tenjinbashi, reaching Tenjinbashisuji 7 chome to the north taking about 40 minutes to walk its length. It took us all morning!

Actually, we came back for a second day to take in the fantastic eating in some of the side-lanes; I suspect even if you lived in Osaka, it would take you a lifetime to get to know each and every stall, artisan shop and eatery with the Tenjinbashisuji environs.

We started at the Osaka Museum of Housing and Living end of the arcade, which is a must-do when visiting Osaka and a re-creation of buildings and street life in the past and also has a model of the whole city in the Edo period. Its spread over several floors of a high-rise building and well worth allocating a good 2 hours and make sure you hire one of the English audio self-tours. 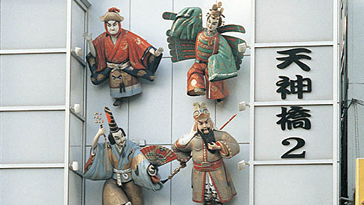 Osaka Museum of Housing and Living

In much the same vein as the Nishiki Market in Kyoto, the Tenjinbashisuji Shopping Street is bustling with small stalls selling artisan produce, fresh local bounty, seasonal foods and specialties. However, this is on a much larger scale and there are more shops with day-to-day essentials mixed in with tourist knick-knacks stalls and kitchen utensil, crockery and small furniture and lifestyle shops.

There are two local Osaka dishes that are mandatory eats here; the Takoyaki, a ball-shaped tapas-sized morsel made from a wheat flour batter filled with diced octopus, pickled ginger, green onion, and brushed with takoyaki sauce (savoury-gravy-like) and skirt of mayonnaise, then topped with dried, shaved Katsuobushi (Bonito flakes), although there is all number of variations on this theme. Moreover, Takoyaki are known and franchised the world-over now with street vendors visible by the black cast-iron indented takoyaki plates frantically turning the balls with chopsticks however, there is something special about the flavour of the ‘real thing’ in Osaka and crouching a tables stall-side with a pint of beer, waiting impatiently for the balls to cool down enough to eat with scolding ones mouth. Actually, they say that by the time you finish your first beer, the Takoyaki will be cool enough to eat, then of course you have to order another beer to wash them down.

The other popular local dish is Okonomiyaki, a savoury pancake of sorts containing base ingredients like grated nagaimo (Japanese type of yam), shredded cabbage and dashi (stock or Miso) and egg to bind it, self-cooked on a Teppanyaki like iron hotplate. Doing the cooking yourself is the essence of this dish as you can decide on the many additions or variations on the theme—okonomi, meaning “what you like” or “what you want”—by adding other ingredients such as thinly sliced pork belly or beef, octopus, shrimps, mocha (Japanese rice cake), vegetables or cheese.

Like Takoyaki, once cooked, the Okonomiyaki is brushed with a savoury sauce (which appears to me to be identical to the takoyaki) and a big skirt of Japanese mayonnaise, then topped with dried, shaved Katsuobushi or bonito. It looks pretty messy as you slap on the sauce and mix in the mayonnaise with a big brush, but it’s a lot of fun.

We had spotted what appeared to be a hugely popular Okonomiyaki eatery in one of the Tenjinbashisuji side-lanes—it’s called chigusa, but I have no idea of the street name/number other than you take the lane on the left next to the shoe shop—and it looked continuously full with a whole lot of happy people cooking away.