On the banks of the Kamo River in Kyoto stands one of the most important shrine in Kyoto, Japan. Along with the Kamo and Shimogamo Shrines, the Kamigamo Shrine is also one of the oldest shrines in the place. The construction of the said Shinto sanctuary began at the end of the 7th century.

A Brief History of the Kamigamo Shrine

The Kamigamo Shrine is dedicated to the veneration of Kamo Wake-ikazuchi, the kami of thunder. A kami is a worshipped spirit or phenomena in the religion of Shinto.

The shrine, which encompasses an area of around 660, 000 sq. m., is a sanctuary that houses a deity that miraculously appeared to the daughter of the Kamo clan ruler. Additionally, the said shrine received its name from the early inhabitants of the area, the Kamo clan. The clan, whose ancestors served the shrine, remained to live in the area long after the assemblage of the shrine.

The shrine remained to be one of the most sacred shrine in Kyoto. Thus, it received the UNESCO World Heritage Site title. It is also one of the seventeen Historic Monuments of Ancient Kyoto. 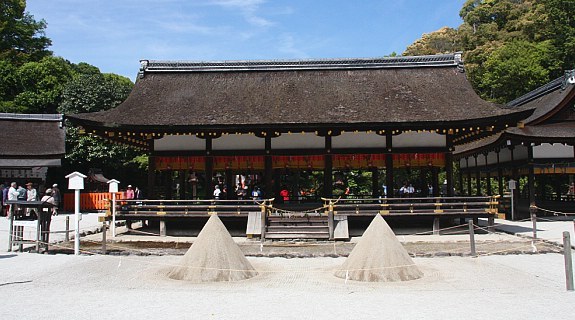 The mounds of sand, otherwise known as Tatesuna and Saiden, represent a deity. Moreover, its arrangement signifies that the deities descended to the ground of Kamigamo in a form of a thunder. 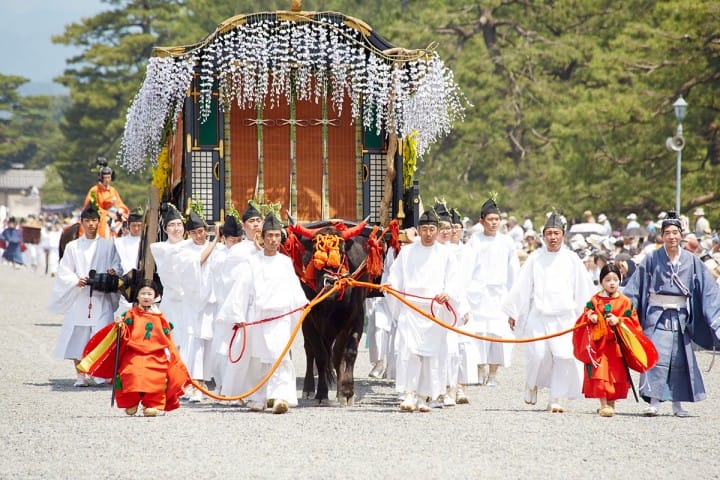 The Aoi Matsuri, or the Hollyhock Festival, is one of the three biggest imperial festivals in Japan. In fact, the people of Kyoto has been celebrating the festival ever since the Heian Period. The annual festival occurs every 15th of May in the city of Kyoto.

The main highlight of the festival is the Roto no Gi. Specifically, Roto no Gi is a major procession that consists of more than 500 people dressed in Royal costumes. The festival got its name from the aoi leaf, which symbolizes the Kamigamo and Shimogamo shrines. Consequently, the people who attend the procession decorate their belongings and costumes with the futaba aoi (hollyhocks) leaves.

During the procession, musicians play instruments from the Heian era, as a way of bringing back the Heian period atmosphere in the streets of Kyoto.

Every September, you can witness the Kasagaki festival in Kamigamo Shrine. The Kasagaki Festival is an annual traditional archery event, which is also practiced by Samurais. Basically, the competition involves shooting an arrow using a bow while riding a horse.

Kasagake is similar to Yabusame and other sarchery styles. However, the Kasagake involves the archer shooting in a “ko-kasagake” way.